‘Thinking is difficult, that’s why most people judge’

This famous second quote from Carl Jung (which has been queried as whether entirely accurate) is simple but profound – after all it is so much easier to prejudge by drawing on past prejudice rather than take time out to reflect, assess, and, allow new thinking to emerge. Any change can feel like a threat.

Reading the autobiography of the German theologian Elizabeth Moltmann-Wendel gives some interesting examples of this. Writing about the role of women in the Protestant church – she was a Lutheran – between 1970 and the end of the century, she explains about the development of early thinking on feminist theology and the reactions to this.

I liked the example in the section where she discusses the prejudice she met when she began to think about how difficult Christian women find it to feel accepted by God, with all their good points and their bad points. This was in 1980. The difficult thinking about feeling accepted by God meant that it was easier for many women to see themselves in a negative light, to note their errors, their faults, their unattractive characteristics. This was familiar self-judgement from years of prejudice and male domination, and interestingly the message of feminist theology that they were oppressed and victims of patriarchal structures as she writes:

‘… deformed and robbed of their selfhood, further reinforced their gloomy view. Had they never heard of the justification of the sinner? How could they be Protestant Christian women and have nothing left in them of the unconditional love of God which accepts us as we are? That is what I asked myself on the way home.’

Elizabeth M-W also experienced the same emotions amongst women theologians whom she describes as untouched by the new thinking at their deeper levels. By taking Luther’s idea that sinners are beautiful because they are loved by God, and fusing this theology with depth psychology, and feminism meant that after much thought she emerged with 3 sentences

She used these sentences as part of lectures, seminars, workshops and in a book A Land Flowing with Milk and Honey.

A number of reactions to her thinking shows how the old judging continued, and how hard people found it to really reflect on this. One response came from the male Lutheran Bishops who cast doubt on the three sentences because it left out sin. On the other side of the debate came criticism from a woman theologian who expressed her fear that the holiness of God could be violated in feminist theology by such statements. Another feminist theologian saw the statements as a definition by women who were ‘not critical’ and ‘not revisionary enough’, and were too imprisoned in ‘femininity as a value system of the nice’. She said she would rather be regarded as a monster.

For Elizabeth M-W the idea of the inclusive love of God was part of traditional male theology, but a part that had been brought back to life again and where difference between people and men and women could be enriching and not merely threatening. One where real thinking rather than judgement might take place. Forty years later it seems just as important. 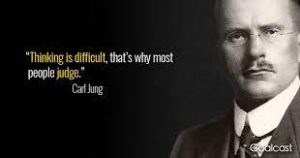