Another book by James H. Cone is called ‘Martin and Malcolm and America: A dream or a nightmare’. In this he explores the backgrounds of both Martin Luther King and Malcolm X to help the reader appreciate the development of their religious and political perspectives and how they influenced and what they each meant for America. Cone discusses the integrationist view of MLK and how this and his stance of non-violence attracted white liberals, and the nationalist view of Malcolm X who urged separation between black and white people – not segregation and the building up of black African nationalism. Although their ideas seem very different there was increasing convergence between them in their last years.

In this post I want to write about the vision that King had in 1956 when he ‘appropriated the God of the black experience “for his own personal life” and became himself a theologian of survival. This took place through his experience as pastor and as the leader and participant in the campaign of a bus boycott to press for desegregation on transport. It was several weeks into the bus boycott when King got an abusive phone call and death threat. Despite having received previous death threats – apparently about forty a day – this particular one stunned him and prevented him sleeping. He worried for his wife and then baby daughter and thinking that a coffee might give him some relief he went to the kitchen. This account from King is quoted by Cone:

‘I started thinking about many things … trying to give philosophical and theological reasons for the existence and reality of evil, but the answer didn’t quite come there … And I discovered then that religion had to become real to me and I had to know God for myself. And I bowed over that cup of coffee, I never will forget it. Oh yes, I prayed a prayer. And I prayed out loud that night. I said, “Lord, I’m down here trying to do what’s right. I think I’m right. I think the cause that we represent is right. But Lord, I must confess that I’m faltering. I’m losing my courage, and I can’t let the people see me like this because if they see me weak and losing my courage they will begin to get weak.”’

As he prayed King felt a heavy burden being lifted form his shoulders, and felt the liberating presence of God as never before.

‘Almost out of nowhere I heard a voice, he said, “Martin Luther, stand up for righteousness. Stand up for justice. Stand up for truth. And, lo, I will be with you, even until the end of the world.”’ After that experience, he said, “I was ready to face anything”. 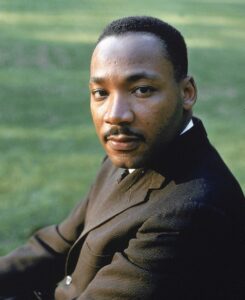 Three nights later whilst at a meeting King was told that his house had been bombed, but to everyone’s amazement he was not visibly shaken: “I accepted the word of the bombing calmly,” King said later, “because my experience with God had given me new strength and trust. I knew now that God is able to give us the interior resources to face the storms and problems of life”.