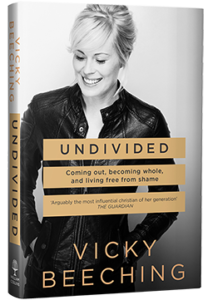 Perhaps it takes a life-time to make peace with all the different parts of ourselves – especially the parts one is embarrassed by or ashamed about – or the way that one is held back by fear. Certainly, adolescence is full of these sorts of conflicts. Sometimes it can turn into neurosis where one part of the mind is in conflict with another part. There’s a desperate need growing up – to be like everyone else – to fit in and look or sound or speak the same.

Reading the book ‘Undivided’ by Vicky Beeching she writes: ‘Diversity can be tricky; the very things that make us stunningly unique can also be the things we hide in the closet because they cause us to feel different from the crowd.’ Her story is about moving from ‘fitting in’ to the Christian conservative evangelical world to being shunned and treated as an outsider because ‘my orientation did not match theirs’. Beeching finally came out as gay in her late 20s and the churches that sang her faith songs turned against her. Her book recounts the horror and cruelty (dressed up as theological conviction) of much evangelical teaching and is dedicated to the memory of a 14-year-old UK girl Lizzie Lowe who committed suicide as she felt that her attraction to other girls and women would not be acceptable in her church.

Vicky Beeching was brought up to believe that the bible was literally true – word for word. Picture book versions of the stories of Noah and the flood, Sodom and Gomorrah, the Egyptian plagues and the sacrifice of Isaac all contributed to the idea of being good and placating a punishing deity. Many worship songs were about battles and fights alongside those of love and forgiveness – how confusing … and the whole set-up male with the leadership entirely men – the dynamic of headship (men) and submission (women). Knowing that she was gay since childhood, Vicky Beeching learnt to shut down her thoughts and feelings as she had been told and indeed then believed that they were ‘off-limits and wrong.’ At 16 she went to ‘be prayed for’ and ‘be set free’ – most people reading the horrific account of this experience would see this as a form of spiritual and emotional abuse – it left her shattered ‘I came away feeling more ashamed and broken’ and panicking that her feelings for women ‘was the sinister work of demons’.

Despite studying theology at Oxford (including secretly reading about the possibility of being gay and a Christian) and then a highly successful career as a worship song leader on the largely US evangelical circuit of mega churches, Vicky Beeching dared not admit to anyone that she was lesbian – and so what was repressed inevitably returned leaving her seriously ill and emotionally terribly damaged. The accounts of her listening to the poisonous attacks on LGBTQ+ people by evangelicals and then performing for these same audiences knowing that if her secret came out, she would be instantly rejected and worse, was of course unsustainable and she had a nervous breakdown. Returning to the UK for medical treatment and therapy it became clear that she had to be true to herself and live authentically.

Coming out as gay and becoming for a while equality spokesperson for LGBTQ+ in the church elicited violent and deeply unpleasant responses in the evangelical world, which led to further debilitating illnesses. And according to her website the damage from the past continues …