Two extracts from Ingrid Betancourt’s ‘Even Silence Has an End’

In the first it is still early days in her captivity – which lasted over six years and included much sadism and deprivation from the FARC guerrillas.

At one point she asked for and was eventually given an encyclopaedic dictionary which she studied:

‘My solitude became a sort of liberation… I could order my life according to the needs of my heart.’ She read the dictionary in the morning and tried to follow physical exercises in the afternoon – in the evening she tried to meditate:

‘[the] meditation had nothing religious about it but invariably led to an awareness of the presence of God. He was there, everywhere, too big, too strong. I did not know what he could expect of me and even less what I was allowed to ask of him. I thought of begging him to get me out of my prison, but I immediately found that my prayer was too trivial, too petty, too focused on my little self, as if thinking of my own well-being or requesting his kindness was a bad thing …’ She reads Romans in the Bible and only wants the Holy Spirit to give her freedom, from captivity then comes to see how at that point ‘I was missing the essential point, that there was probably something else, greater than freedom … something that for the time being I did not know how to appreciate.’ Full of questions but no answers she finds that through the circular thinking that went on every day she began to shift from action to introspection: ‘I wanted to build a stronger, more solid self … I needed another form of intelligence, another sort of courage and greater endurance. But I did not know how to go about building those. It had taken over a year of captivity for me to just begin to question my own self’.

Three years later Ingrid Betancourt following an attempted escape is kept with a chain around her neck and tethered to a tree. She was isolated from other hostages and spends time ‘huddled in my hammock, clinging to a silence with no end’ She hears on a radio a preacher analysing ‘And he said to me, My grace is sufficient for you; for my strength is made perfect in weakness … for when I am weak, then am I strong.’ She writes that this should be read as a poem, without any preconceived ideas. ‘I thought it was universal and could be used by anyone seeking for a meaning in suffering.’ 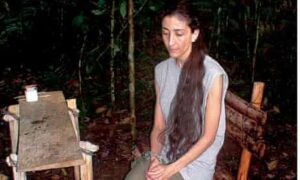