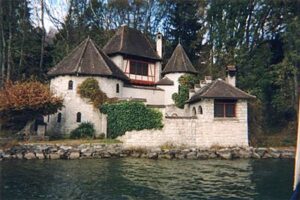 Carl Jung’s spiritual homeland was a specific area along the upper lake of Zurich, at a place called Bollingen where he eventually built a tower. ‘I had always been curiously drawn by the scenic charm of the upper lake of Zurich … situated in the area of St Meinrad and old church land, having formerly belonged to the monastery of St Gall.’ Over the years Jung built on to the original round house which was begun in 1923 after the death of his mother, and so by 1955 after the death of his wife he added a further tower to the two already in place ‘the maternal’ and the ‘spiritual’ – a place connected with the dead.

Jung saw the place and the surrounding water and land as somewhere he could be himself, and that it represented for him the process of individuation, where he could become ‘what I was, what I am and will be. It gave me a feeling as if I were being reborn in stone … I built it in a kind of dream. Only afterwards did I see how all the parts fitted together and that a meaningful form had resulted: a symbol of psychic wholeness’. It became a mandala in stone.

It was at this place that Jung felt in the midst of his true life and could be most deeply himself.

‘At times I feel as if I am spread out over the landscape and inside things and am myself living in every tree, in the splashing of the waves, in the clouds and the animals that come and go, in the procession of the seasons. There is form over the decades, nothing with which I am not linked. Here everything has its history, and mine; here is a space for the spaceless kingdom of the world’s and the psyche’s hinterland.’

Jung did without electricity, tending the fireplace and stove himself, and using old lamps – the water was pumped form the well, and he chopped the wood and cooked the food – he thought that such simple acts make people simple, and that it is difficult to be simple. It was also where ‘silence surrounds me almost audibly, and I live, “in modest harmony with nature”. Thoughts rise to the surface which reach back into the centuries and accordingly anticipate a remote future. Here the torment of creation is lessened; creativity and play are close together’. Jung experienced in a wakened state a visitation from souls from the past – coming he thought out of curiosity to see what he had built.

On his 75th birthday Jung inscribed a stone with different quotations on each side. The side facing the lake reads:

‘I am an orphan, alone; nevertheless I am found everywhere. I am one, but opposed to myself. I am youth and old man at one and the same time. I have known neither father nor mother, because I have had to be fetched out of the deep like a fish, or fell like a white stone from heaven. In woods and mountains I roam, but I am hidden in the innermost soul of man. I am mortal for everyone, yet I am not touched by the cycle of aeons.’

Bollingen was Jung’s spiritual homeland where he could ‘live life in the round, as something forever coming into being and passing on.’