I have written about Raissa Maritain before – in 2015 but her spiritual journal is full of good things. In the preface written in 1963 by Fr Rene Voillaume, who was the Prior of the Little Brothers of Jesus, he writes ‘in reading these pages one feels as if one were been given direct access, through an astonishing sobriety of expression, to the world of Truth and of the Kingdom of God.’  The reader is ‘guided on the path of contemplative prayer, on the path of secret love, of the “mad”, boundless love for God by the knowledge of these spiritual experiences. And how could we know them, if those who have lived them had not had the candour to tell us about them.’’

Raissa Maritain (1883-1960) lived a life that was dedicated to intellectual work. She was Russian, a poet and philosopher who moved to France to study and where she met her husband Jacques Maritain who, later, following her death, published her journal. It is divided into 4 notebooks – the first 1906-1917. Amongst the prayers and psalms copied out there are two poems though Raissa called them hymns. One written in 1906 begins:

My God I am here before thee

I crumble into nothing before thee

I adore thy greatness

My need is immense

Have pity on me

Let thy spirit dwell in me …

In 1907 she is seized with a feeling of deep ‘familiarity with God, with Jesus, with Mary. I wept and exulted. It was as if there were a perpetual spring of joy, of sweetness, of happy certainty welling up in me – it lasted a long while- and the memory of it has not been effaced.’ 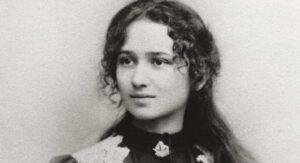 Ten years later she records longing to occupy herself with God but being unable to as taken over by a ‘state of trouble and helplessness’. On the advice of her then spiritual director, she ‘gave all my mornings to resting in silence with God, according to what God will ask. Not to let anything disturb me unless someone comes to fetch me.’

It is worth mentioning that Vera, Raissa’s sister lived with them – assuming ‘the role of Martha’ and leaving Raissa free to deepen her life of contemplative prayer. The notebook includes details to a developing experience of ‘absorption in God’. She writes: ‘Be still, leave all occupations and know, know God, contemplate him, give him your thought and your heart; give thanks to him.’