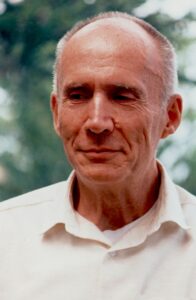 Robert Johnson’s description of meetings with Carl Jung isn’t so much about an analysis, but rather about life-changing encounters. Johnson first met Jung in 1948 who immediately began to lecture Johnson, saying:

‘You have been claimed for an inner life … if you remain loyal to the inner world, it will take care of you. This is what you are good for in this life. I must tell you at the outset that you should never join anything’.

Johnson says he was in shock, he’d only been with Jung a few moments and was being told how to live his life – Jung made it clear that he wanted no interruptions. He continued that Johnson must learn to accept that whatever he needed would turn up for him: ‘Even if you never produce anything of social value, your relationship with the collective unconscious will justify your reason for being on the face of the earth.’

Johnson’s dream had been about four Buddhas and a snake, and whilst Jung seemed to read Johnson’s mind and his longing for community this was not the path for him – rather Johnson should never marry or join any organisations and be content to live most of his life alone. The outer dimensions of his life needed to be kept as modest as possible. Interestingly Johnson claims that he did not resent the lecturing as with Jacobi. Part of the dream had involved Johnson making a circle with his arm and then the snake began to talk – Jung analysed that this circle was a mandala meaning that Johnson could survive what might feel overwhelming by giving it form.

‘Dr Jung saw the potential in me as well as the dangers ahead. I remember sitting there thinking, “This man is just like me, except infinitely wiser. He understands me completely” … He was not like me at all, but he was capable of making me feel as if we were one mind.’

Jung thought that Johnson had no choice but to cope with the dream, he also saw that the young man was close to drowning in the collective unconscious. He encouraged him and gave advice about how to survive outside the mainstream: ‘In our short time together, he tried to teach me how to live close to the archetypal powers of the collective unconscious.’ Jung thought Johnson’s dream would take a lifetime to realize, and that his life would be difficult. Over and over, he repeated the same message, ‘If you never amount to anything in ordinary cultural terms, it doesn’t matter, simply to have taken part in this event of the collective unconscious is your contribution.’ Johnson found Jung almost clairvoyant and deeply intuitive.

Johnson adds though despite the assurances he then spent the next three decades running from the implications of the dream and trying to control his life, and make things go according to his will. He did not follow the advice during that time, but all Jung said turned out to be true – eventually involving a great transformation of consciousness.