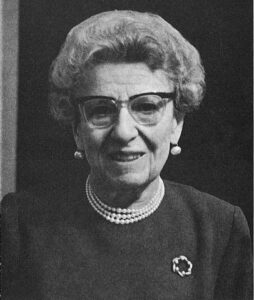 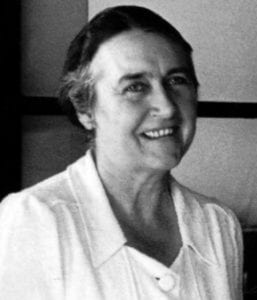 At the age of 26 and attending the C. G. Jung Institute in Zurich, Robert Johnson entered into a second analysis – this time with Jolande Jacobi. She had sponsored Johnson for the training, but, as he writes, although he was very fond of her, he soon found that she was not at all the right therapist for him.

One of the things he found was that she would tell him funny stories, but took to giving him advice which was unwelcome. The description seems pretty off putting:

‘Her intent apparently was to pulls me out of the extreme introversion and get me going on the road of life. I soon came to resent her pushiness. She conducted analytical hours pacing the floor, while I sat in a large chair in the corner watching her. It was said that Dr Jacobi paced with such ferocious intensity that her neighbours in the apartment below had once brought a legal action against her for disturbing the peace. Dr Jacobi came to court and informed the judge that she was an analyst, a Hungarian, an extrovert, and that pacing was an essential aspect of her work. The judge listened patiently, took Dr Jacobi at her word, and then ruled that she could pace only between the hours of 8 a.m. and 10 p.m. so as not to disturb the neighbours.’

Things came to a head when several months into the treatment Johnson had a remarkable dream which he could not understand. However, taking it to the session Jolande Jacobi dismissed the dream saying that it was an old man’s dream and they would not analyse it. Johnson felt that the dream was important and didn’t know what to do with it. He thought it had frightened the analyst and so he informed her that he was leaving as her patient. Dr Jacobi never forgave him, and from then on whenever she met him in the Institute would not look at him and for years after discredited him wherever possible.

Johnson then approached Emma Jung whom he experienced as a kind and sensitive soul – unlike Jolande Jacobi who he felt bullied and lectured him Emma Jung would sit quietly and say little. She encouraged and supported him but seldom offered advice throwing Johnson back on his own resources.

‘I would bring my dreams to Mrs Jung and tell her my interpretations. I recall her saying once in a small voice, “Mr Johnson, I’m afraid that is not satisfactory to me. You must dig deeper”.’

Finally Johnson took the big dream that has been rejected by Jacobi – Emma Jung listened but afterwards took the dream to her husband – Johnson adds ‘and my life changed forever’.