In the 1960s Thomas Merton engaged in an interesting correspondence with a woman then known as Linda (Parsons) Sabbath. Her conversion is followed by a series of vivid and even violent ecstasies, experiences of joy and elation which she first interpreted as part of a manic-depressive psychosis, but which a colleague insisted were religious experiences. Merton advises her to keep united to God’s will but Linda is convinced she is mad because of the terrible things that have happened to her and her psychiatric history.

Merton acknowledges Linda’s experience and in a non-threatening way, he wants to help her to unravel the issues of psychosis and religious experience and to co-operate with her, but provides clear boundaries and picks up her projections. He makes immediate connections and intuits that Linda despite her bravado is frightened of madness, and her self-harming is hurting herself and others.

‘Not that I agree with your diagnosis of yourself as psychotic. But I can see where you could easily have one fantastic time… I just don’t think you can sweep it all away with the word ‘psychotic’ and I think you are just kicking yourself in the pants when you say it, which would be a good thing not to do … the thing looks to me to be pretty mixed up like you could be a mystic and you could also be getting a lot of static and side effects that are partly mental (which is quite usual).‘

He reminds her that religious conversion and experience is not rational and straightforward anyway. Religious faith transcends what most people see as the rational, and if rationality is sanity, faith can be considered as a form of delusion and madness. But as some have found true faith brings its own transformation of the mind, into sanity. Spiritual sanity is grounded in praying, meditating and contemplation all of which lead to an altered state of consciousness which may be seen as unusual and beyond the more common experience of the majority of people. Here again a psychological container is needed to manage spiritual experiences. As John Costello says, ‘in between so-called normality and madness there are many shades of sanity, spirituality, wholeness and holiness’.

Linda wrote a book called The Unveiling of God under her then name Linda Miroslava Sabbath, and published in 2010, describing herself as a visionary, mystic, and artist, writing that ‘Thomas Merton had pointed the way for me’. 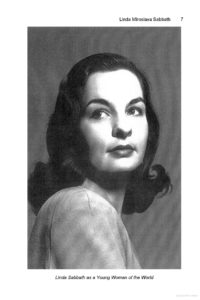