Later in her life Evelyn Underhill revealed the pull to the Roman Catholic church, but her feeling that she was following God’s will by staying in the Church of England. In the early 1930s she wrote to one correspondent about how awful on occasions the church can make one feel.

‘As to feeling rather dismayed by the appearance of the Church Visible at the moment – that is inevitable I’m afraid to some extent. But keep your inner eye on the Church Invisible – what the Baron [Baron Von Hugel – her own earlier spiritual director] used to call “the great centralities of religion”. That is what really takes one up into itself “with angels and archangels and all the company of Heaven” not only the Vicar and the curate and the Mother’s Union Committee. But there is something entrancing, don’t you think, in a supernatural society, so wide and generous and really Catholic, that it can mop up all these – even the most depressing and still remain the Bride of Christ? The Church is an “essential service” like the Post Office, but there will always be some narrow, irritating and inadequate officials behind the counter and you will always be tempted to exasperation by them.’

Evelyn passed onto others her own experience which is that the question should not be “What attracts and helps me?” but “Where can I serve God best?” – and usually the answer to that is “Where He has put me”. Again, she reminds her correspondent that the C of E desperately needs people who can pray and help people and to leave that for the devotional atmosphere of Rome is like abandoning the trenches and going back to the barracks. Referring to Newman’s conversion as “spiritual selfishness” she counsels her correspondent that “there is a great deal still to be done and a great deal to put up with, and the diet is often none too good – but we are here to feed His sheep where we find them, not to look for comfy quarters! At least that’s my firm belief! And the life of prayer can be developed in the C of E as well as anywhere else if we really mean it.”

Her advice to another is to keep your Christianity wide as well as deep – there is the Church Universal. God enlightens us bit by bit – as we can bear it and where we are.

‘Don’t strain after more light than you’ve got yet: just wait quietly. God holds you when you cannot hold Him, and when the time comes to jump He will see to it that you do jump – and you will find you are not frightened then … just be supple in His hands and let Him mould you (as He is doing) for His own purposes, responding with very simple acts of trust and love.’ 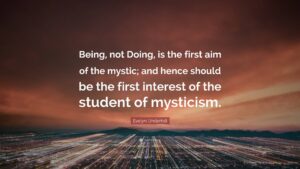