Evelyn Underhill’s correspondence with the same person as discussed in the previous post continued apace, so that six months later, Evelyn is able to write that from the correspondence, she thinks that things are going well. She reassures the person to not get caught up in what the Church of England says is there during the Eucharist, or indeed what anyone else says it is about, but rather to be present to what is there. ‘Direct spiritual experience is the only possible basis; and if you will trust yours absolutely you are safe’.

A couple of months later she responds to the correspondent by saying that all she can do is tell of the things that Evelyn has found out for herself – on the chance that they might be relevant.

‘Now it seems to me that one’s life only attains reality in so far as it is consciously lived in the Presence of God … attained and clung to by a definite act of will … Once you can breathe that atmosphere, it will determine most questions … as a means of getting at this, there is the regular and systematic practice of meditation: by which of course I do not mean thinking about a pious subject but the “deep” meditation which tends to pass over into unitive prayer. You probably know that experience already … once the will is in proper control you can always enter into the silence, though often enough without finding anything (consciously) there. That I think does not matter much. What does matter is, never to give up, once you have started on the way, in spite of the horrid discouragements and ups and downs.’

Clearly this letter has a mixed response, for in the next Evelyn tells the seeker not to dwell so much on sin – too Calvinistic – ‘refuse to pander to a morbid interest in your own misdeeds. Pick yourself up, be sorry, shake yourself, and go on again’. Meditation has proved difficult, so some advice follows on how to close down the active mind. Evelyn suggests:

First of all putting oneself in an easy and natural physical position and shutting the eyes.

Secondly to have a phrase, or a truth that you can keep in the mind ‘turning it over as it were, as you might finger some precious possession’.

Thirdly by an act of will to deliberatively shut oneself off from the senses and turn oneself inwards:

‘… allow yourself to sink, as it were, downwards and downwards, into the profound silence and peace which is the essence of the meditative state. More you cannot do for yourself … it is the “shutting off of the senses” and what [Jacob] Boehme calls the “stopping the wheel of the imagination and ceasing from self-thinking” that is hard at first.’ 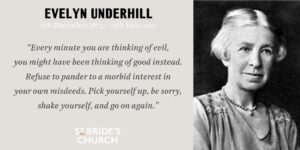