It seemed timely in Lent to return to Evelyn Underhill and take some extracts from her letters. Whilst her writing style is at times dated, her ideas are usually not. In this letter written on May 12 1907 she is writing to someone who is struggling to understand, accept and ‘grasp’ the Anglican faith.

‘You say I am to consider that you are an Anglican. But – there are Anglicans and Anglicans! The question, for instance, whether you really believe in the Sacraments, as actual vehicles of the Spirit and not merely beautiful and helpful ideas, is a vital one. The keys of the Catholic position (and Anglicanism is of course a slightly diluted Catholicism) are,

A The Incarnation and

You see, if you can accept these things as realities for you, you have at once something to “go upon”.’

Evelyn then wonders about which dogmas the correspondent had found so repellent – adding that many are difficult and some are nothing to do with the inner life, but reminds us that a formal creed is not a faith, but is to be seen as a symbol of the faith. She sympathises with a feeling of restlessness and not being able to grasp something, but all that is better than apathy. Any struggle with faith is a way of purgation which comes before a sense of illumination. Her next advice is rather inspiring as she writes:

‘You may also take for granted, of course, that as long as you want the peace and illumination for you own sake, you will not get them. Self-surrender, an entire willingness to live in the dark, in pain, anything – this is the real secret. I think no one really finds the Great Companion till their love is of that kind that they long only to give and not to get.’

This might sound a bit masochistic but I think it’s more about living in the present moment – whatever form that may take – even if it is difficult.

She then provides a long reading list to her spiritual directee beginning with The Confessions of St Augustine and ending with Francis Thompson’s poem The Hound of Heaven.

I fled Him, down the nights and down the days;

I fled Him, down the arches of the years;

I fled Him, down the labyrinthine ways

Of my own mind; 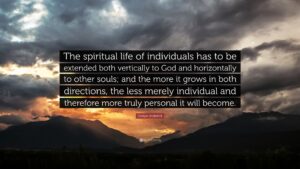