Over the Christmas break I read ‘In Search of the Lost’ by Richard Carter who is associate vicar for mission at St Martin’s in the Field. The book published in 2006 is in part a diary kept by Richard Carter over the period of the kidnapping and eventual murders of seven of the Melanesian Brothers. The Melanesian Brotherhood is an Anglican religious community of men in simple vows based primarily in the Solomon Islands, Vanuatu, and Papua New Guinea, and Richard Carter was for many years part of the Brotherhood community and involved in teaching and chaplaincy work.

Between 1999 and 2003 when ethnic tension developed in the Solomon Islands, the Brotherhood were involved in peace-making efforts gathering armaments and establishing a ceasefire. One rebel leader refused to comply and when Brother Nathaniel Sado, who knew the warlord, went to reason with him, he did not return. On 23 April 2003, six brothers went to investigate what had happened and they were held hostage. On 8 August 2003, the Police Commissioner was able to inform the Brotherhood that all seven were dead. Br. Nathaniel had been tortured for several days before dying, three of the others had been shot on arrival and the remaining three had been tortured and shot the next day. The bodies were interred at Tabalia, the motherhouse of the Brotherhood in October 2003.

In this extract Richard Carter writes after the news of the confirmation of the deaths:

It will always be a miracle of faith that, at the very bottom, at the point when I really did not know how we could go on, God took over. When I look back I am so thankful at the way there were those who were present like aspects of Christ, making those following weeks possible. I did not realize it at the time, but this tragedy was to become the saving event, a place I would revisit again and again in my memory, not to relive the pain but to discover it had become a place of hope and of courage. The mystery of these events will never go away and three years later I am still unravelling everything that happened and discovering a little more of the truth of our gospels. Suddenly I find I am touched by a memory so strong, and I find myself grieving for these seven Brothers again, or being blessed by them, or given courage by them. I remember a dream I had: I was drowning and each time I tried to reach the surface I was pushed back under the water, and then I saw Christ swimming towards me, brave and free, and he breathed into me and he said “Do not be afraid, you can breathe underwater”. 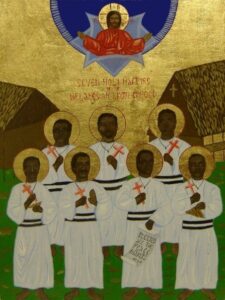 Icon of the Melanesian Brotherhood martyrs at Canterbury Cathedral

“Goodness is stronger than evil

Love is stronger than hate

Light is stronger than darkness

Life is stronger than death

Victory is ours through him who loves us”