In her important book ‘God is not a White Man’, Chine McDonald skilfully unpicks the images that Christians and others have solidified over centuries to reflect white supremacism. In the early part of the book, she explores the relationship between faith in God and the racial injustices inflicted on Black people over the centuries [Chine McDonald uses upper case for Black and lower case for white – to reflect how in the past Black people have been always placed lower case]. The statement in her title runs contrary ‘to how centuries of theology have portrayed God’. She adds that there is a double meaning in this:

‘Whether or not God and Christ have literally been portrayed as white men, our views of God, our theology and our practice have been created and shaped within the context of a system of patriarchy and white supremacy. This dominant Christian narrative of who God is … has also influenced wider society.’

McDonald explores how important it is to try to liberate God from ‘the limited man-shaped box’ that we usually put him in, and from the assumption of whiteness. She describes how the image of the long haired and bearded white Jesus developed during the Byzantine era, and through famous art works including the wildly popular image called ‘The Head of Christ’ by Warner Sallman in the 1940s. This is Jesus with dark-blonde wavy hair, perfectly shaped beard and piercing eyes – an image reproduced more than 1 billion times world-wide. She adds that the popularity of this image is the problem where the ‘white Jesus is the logical consequence of a world that values whiteness as supreme’. The reality of Jesus as a middle eastern Jewish/Palestinian figure – who would have looked like an average Galilean man of his day is down played: ‘In a world where whiteness is power, then of course, an omnipotent all-knowing God must be white.’ 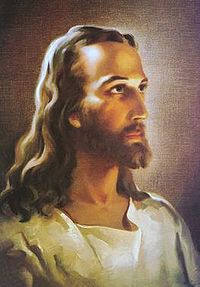 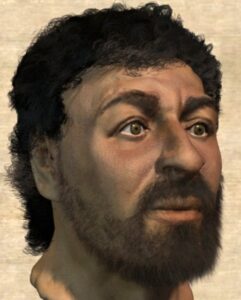 Warner Sallman’s Head of Christ  and Richard Neaves’ reconstruction from a skull of what Jesus might have looked like.

McDonald quotes Robert P. Jones who writes that the emphasis on a personal relationship with Jesus that is front and centre in white evangelicalism only served to cement the depiction of Christ as white.

‘Whites simply couldn’t conceive of owing their salvation to a representative of what they considered an inferior race. And a non-white Jesus would render impossible the intimate relationalism necessary for the evangelical paradigm to function: no proper white Christian would let a brown man come into their hearts or submit themselves to be a disciple of a swarthy Semite.’

After the murder of George Floyd, and Black Lives Matter protests, Archbishop Justin Welby agreed that the way the Western church portrays Christ should be reviewed, and wrote: ‘Jesus was Middle Eastern, not white … But the God we worship in Christ is universal…’ but, as McDonald points out, at that time there was not a single diocesan bishop in the Church of England who was Black or minority ethnic. And a Black ordinand called Augustine Tanner-Ihm was turned down for a post as a curate in June 2020 with the explanation that despite his obvious talents ‘the demographic of the parish is monochrome white working class, where you might feel uncomfortable’ – the Bishop of St Albans later apologised.