Maharaj-ji’s teaching is ‘to love everyone and tell the truth’. Ram Dass describes an occasion when he was angry and frustrated at the demands being made of him by other westerners for counselling and spiritual guidance when he was on retreat with Maharaj-ji.

‘I felt like none of the westerners had any understanding of dharma. I was made and feeling very righteous about it … For two weeks I refused to see anyone. The others told Maharaj-ji. When I saw him, he said, ‘Won’t you help them?’ Ram Dass writes that he knew he was supposed to be loving and serving everyone. One day when he missed the bus and had to walk miles to the retreat house, he arrived tired, angry and feeling rejected. He was offered food by another retreatant: ‘a wave of anger broke over me. I took the food and shoved it in his face.’

‘“Ram Dass!” Maharaj-ji yelled across the courtyard. Throwing prasad [the food seen as sacred] was definitely a sacrilege. “What’s the matter?”

I ran over to him. The other westerners sat on the opposite side of the courtyard looking stunned. I said, “I’m angry at those people. They’re all adharmic, bad people.” I looked over and saw them all in their badness. They were whiny, selfish, needy.

Maharaj-ji sounded sympathetic. “Oh, Ram Dass is angry,” he said. Then he looked at me. “Ram Dass, love everyone. Love everyone and tell the truth.”

He leaned over and looked me in the eye, practically nose to nose. He said, “Tell the truth. And love everyone.” 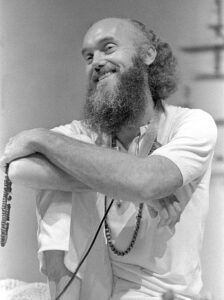 surrender to Maharaj-ji. It’s a rare moment when your guru gives you a direct command. Not to be taken lightly.

I knew what Maharaj-ji really meant. If, from my soul, I saw someone as a soul, I could love him or her as a soul, as part of God. On the other hand, if I remained mired in my personality and my anger, I could be stuck on the karmic wheel of birth and death for many more lifetimes.

Maharaj-ji called for someone to bring a cup of milk, which in India is always warm milk, usually with a little sugar, almost like mother’s milk. He handed me the earthen cup. I drank some of it.

He said, “Give up anger. If you try to give up your anger, I’ll help you with it.”

For me to give up the anger, I had to give up my whole position, all my reasons for being angry. My pride. But it’s hard to be angry drinking mother’s milk from the guru. I looked over again at the western satsang. Now they weren’t whiners. They were luminous beings with light coming out of them and I loved them all. What was in that milk?

Maharaj-ji had done it to me again, confronting me with my negative emotions, anger and jealousy and self-righteousness, which were keeping me separate from him and everyone else and from God. I’d been wallowing in self-pity – not to mention self-hatred and unworthiness, which of course I was projecting onto everyone else. Maharaj-ji just sat there twinkling, an unflinching mirror.

I knew I had to make amends to my satsang brothers and sisters. Maharaj-ji’s essential teaching is to feed everyone and love everyone. I took an apple and cut it up. Then I went from one member of the satsang to another. Maharaj-ji said you should feed others with love, if you feed someone in anger, it’s like giving them poison. I looked each person in the eyes, until I could see the place in them where we are love together, and then I fed them each a piece of apple. It took a while.’