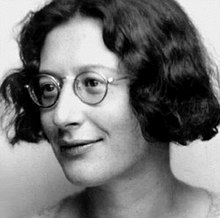 Simone Weil, philosopher, political activist and religious mystic, was born in Paris in 1909 and, after graduating in philosophy in 1931, she taught in secondary schools while pursuing an active career as a trade union organiser. She wanted to learn from the inside about the oppression of factory work and so took a year’s leave in 1934 and was employed on the factory floor for the production of Renault cars. She became physically ill from the strain and this pattern was repeated when in 1936 she spent a brief period with the Socialist forces in Spain, but had to be invalided home. Her mission to be amongst those whom she saw as oppressed took her to the South of France where she worked as a farm labourer. In 1942 she escaped from France with the intention of collaborating with the Free French in London. Simone Weil’s desire was to be sent back behind German lines in occupied France but failing to achieve that goal, she confined herself to the miserly food rations allowed the occupied French. Once more her health gave way and she died in a sanatorium at Ashford in Kent on 29th August, 1943. Simone came from an agnostic background but was deeply involved in mysticism – she has been called a Platonic Christian mystic – as she saw her life as impelled by mystic impulses that lovingly advanced her toward the utterly unknowable. Her journey she saw as involving ‘an expenditure of self in the form of a powerful love that seizes this subject – an expenditure that comes at the price of subjectivity’. Her desire was for love to take her ‘across the threshold of experience’. Fr Perrin a Dominican priest in Marseille, who she first met in 1941, encouraged her deepening relationship with God and much of her religious writing is based on their conversations.

Her experience of God is one of absence, ‘the void is God, the void is primordial’. She believed that the soul has to go on loving in the emptiness, ‘or at least to go on wanting to love, though it may only be with an infinitesimal part of itself. Then, one day, God will come to show himself to this soul and to reveal the beauty of the world to it, as in the case of Job.’

It is through love, as Simone discovered, that we pass from death to life. Love for her fellow human beings was the mainspring of Simone’s existence, and the chief reason she gave for refusing baptism and staying outside of the Church but close to God – she wanted to identify with ‘the least’ in society without gaining any special privilege. Speaking of the materialism of the world and its need for love she explained in a letter to Fr. Perrin:

‘I have the essential need, and I think I can say the vocation, to move among men of every class and complexion, mixing with them and sharing their life and outlook, so far that is to say as conscience allows, merging into the crowd and disappearing among them, so that they show themselves as they are, putting off all disguises with me. It is because I long to know them, so as to love them just as they are.’

She believed in the need to train the will and submit to discipline. But ultimately it is not we who seek God, but God who reaches out to us or, as she expressed it: ‘We cannot take a step towards the heavens. God crosses the universe and comes to us.’