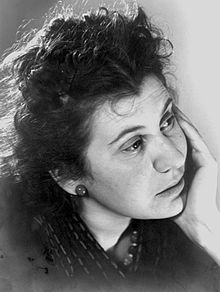 Etty Hillesum was born in January 1914 in the Netherlands – her father was Dutch and her mother Russian. She came from a highly cultured and talented Jewish family and she died in Auschwitz on 30th November 1943. Her spirituality is not church based but deeply reflective of and in touch with the secular trends – in 1941 when she begins her journal Amsterdam is already a deeply hostile place for Jewish people. Her inner journeying is greatly helped by the therapeutic work of Julius Spier who was also her lover. Unlike some others Etty understood what was happening to the Jewish people in the Netherlands where daily humiliations and deprivations led in spring 1942 to mass deportations to work camps and concentration camps. It is in this terrifyingly cruel and hostile environment that her increasingly intimate union with God comes into being.

Her spiritual pioneering is in the dependent and loving relationship with God that becomes increasingly central as everything else that previously offered certainty is stripped away.  On the death of Julius Spier, her friend and lover, in September 1942) she is able to write in her journal:

‘I now realise, God, how much You have given me. so much that was beautiful and so much that was hard to bear. Yet whenever I showed myself ready to bear it, the hard was transformed directly into the beautiful. And the beautiful was sometimes much harder to bear, so overpowering did it seem . . . With the passing of people. I feel a growing need to speak to You alone. I love people so terribly, because in every human being I love something of You.’

Her writings detail her gradual and growing awareness of surrender – letting attachments, fears, lack of direction and what she calls indolence go. And also letting go of the experiences of spiritual consolation which she sees as ambition: ‘In near-ecstatic moments I think myself capable of God knows what, only to sink back again into the deepest pit of uncertainty.’ She realises that the key to detachment, peace and creativity lies in living each moment fully, as the place in which God is present to us. And so where:

‘I now have the inner certainty that everything will be taken care of. Before, I always lived in anticipation, I had the feeling that nothing I did was the ‘real’ thing, that it was all a preparation for something else, something ‘greater’, more ‘genuine’. But that feeling has dropped away from me completely. I live here-and-now, this minute, this day, to the full. and life is worth living. And if I knew that I was going to die tomorrow, then I would say: it’s a great shame, but it’s been good while it lasted.’

She becomes increasingly conscious of the indwelling presence of God and open to what Jung called ‘extended compassion’ and the suffering world, believing that her presence and availability would benefit others. She writes: ‘God, take me by Your hand … I shall follow you wherever your hand lead me and shall try not to be afraid. I shall try to spread some of my warmth, of my genuine love for others, wherever I go. … I only want to try to be true to that in me which seeks to fulfil its promise.’

Her pioneering spirituality brings an inner freedom and increasing ability to face and absorb the external horrors around her without being destroyed by them. ‘True peace will come only when every individual finds peace within themselves …’