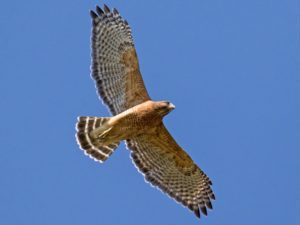 In February 1950 Thomas Merton again experiences a spiritual awakening through his observation of the birds. At this time he is praying in an attic of a garden house which he used sometimes as a quasi-hermitage. It’s full of shovels with a broken window, and the distant sound of trains coming from the valley. He becomes aware of a great noise of excitement and restlessness amongst the many starlings that roosted and were singing in the nearby trees. This was because an eagle was flying overhead, and it suddenly attacked one of the trees with the starlings in them. Merton writes, ‘before he was near them, the whole cloud of them left the tree and avoided him and he came nowhere near them’. But once calm had been restored and the starlings were moving about on the ground, singing again, like lightening it happened:

‘from behind the house and from over my roof, a hawk came down like a bullet, and shot straight into the middle of the starlings just as they were getting off the ground. They rose into the air and there was a slight scuffle on the ground as the hawk got his talons into the one bird he had nailed. It was a terrible and yet beautiful thing, that lightening flight, straight as an arrow, that killed the slowest starling.’

Merton tries to return to praying, but the hawk enjoying eating the starling in the next field diverts him into thoughts of medieval falconry, Arabian princes, and the way some people love war. ‘But in the end’ writes Merton, ‘I think that hawk is to be studied by saints and contemplatives because he knows his business. I wish I knew my business as well as he does his.’

This for Merton is about single pointed awareness, about focus and he addresses the hawk as a fellow artist, one revelling in his craft:

‘I wonder if my admiration for you gives me an affinity for you, artist! I wonder if there will ever be something connatural between us, between your flight and my heart, stirred in hiding to serve Christ, as you, soldier, serve your nature. And God’s love a thousand times more terrible! I am going back to the attic and the shovels and the broken window and the trains in the valley and the prayer of Jesus.’