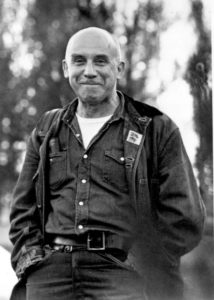 One of my favourite talks given by Thomas Merton to the novices is called ‘A life free from care’ which you can find in Essential Writings selected by Christine M. Bochen (p. 67). Merton is writing about life in the monastery but I think we can make use of it at the moment too. He says that ideally in the monastery you put away all care. In this current crisis we may actually be in the equivalent of a monastic cell because we are in isolation, but we may be very much full of care: care for our health, care for our loved ones, care about the world, worrying about shopping – where can I find bananas – what about bread, what shall I do, and why can’t I make good use of this time …

Merton says that we are “devoured by care … and then the thoughts fears, reflections, regrets and anxieties”. Merton quotes the following suggesting that this is what we are supposed to do: “Since God offers to take upon Himself the care of our affairs, let us once for all abandon them to His infinite wisdom”, in other words God is taking care of everything. Merton says that if we can let go of all our cares that cloud our minds and vision, then he knows from experience that what this does,

‘is that in fact it is sometimes possible to see that things become transparent. They are no longer opaque and they no longer hide God…life is as simple as this. We are living in a world that is absolutely transparent, and God is shining through it all the time. This is not just a fable or a nice story, it is true. And this is something we are not able to see. But if we abandon ourselves to Him and forget ourselves we see it sometimes and we see it maybe frequently: that God manifests Himself everywhere, in everything – in people and in things and in nature and in events and so forth. So that it becomes very obvious that He is everywhere, he is in everything, and we cannot be without Him. You cannot be without God. It’s impossible, it’s just simply impossible.’ 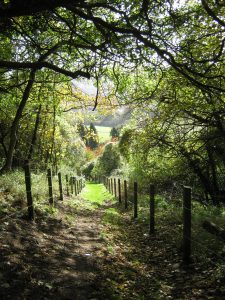 I’ll return to the shame theme in due course but in the meantime and given the situation these thoughts seemed more relevant.

Seeing it as a retreat is one possible way of viewing what is happening and the enforced restriction on our activities. Thomas Merton wrote about how being apart from the other monks in the hermitage was his way of doing it. He wrote to Rosemary Radford Ruether in March 1967 about the hermit life.

The letter, Merton admits later, is somewhat defensive as he was reacting to her accusation that he, Merton, was cutting himself off in some ways from the world and the struggle for justice in the world by retreating into the woods. In our current pandemic we are not willingly retreating into the forest, but metaphorically we are retreating to our individual cells. In his defence of monastic concerns, Merton sees that these ultimate concerns are in fact human and universal. It’s about stripping off the veneer of the social world and reducing oneself to ‘a plain, simple’ person. Merton continues: ‘This condition of mere humanity does not require solitude in the country, it can be and should be realised anywhere. This is just my way of doing it. What would seem to others to be the final step into total alienation seems to me to be the resolution of all alienation and the preparation for a real return without masks and without defences into the world, as mere man.’

I like the idea of returning to the world after time apart without masks. The actual face mask has become such a symbol of our contamination and fear of being infected by or infecting one another; but the infection that does not recognise nationality, race, faith, gender and sexuality reminds us that there is more that unites than divides us. The psychological masks and defences are usually what we use to present ourselves to the world; if they begin to be dismantled as we have time out maybe we can see that they are less needed.

The Hidden Ground of Love pp.508

The word ‘shame’ comes from a word that means ‘to cover,’ that is, to hide. And shame truly is the hidden affect. The parts of ourselves we wish to hide are the shameful parts, and we also wish to hide the fact that we are ashamed. In this way, to use Jungian language shame is strongly connected with the shadow. If we can’t prevent it, we hide it. In common language when we talk about embarrassment, humiliation, or mortification we are talking about shame.

Shame occurs typically, if not always, in the context of an emotional relationship, as shame is experienced both through the actual eyes of the other, and the internalized parental eyes that come from our infancy. ‘You ought to be ashamed of yourself’ and ‘shame on you’ – both exclamations which we have probably all heard at some time, and to which we have reacted accordingly – reacted with shame. Because the sharp increase in self-attention, (and sometimes the increased sensitivity of the face produced by blushing) causes the person to feel as though they were naked and exposed to the world. Shame is a feeling of loathing and condemnation toward oneself, about the state and nature of one’s whole sense of self. Shame motivates the desire to hide, to disappear. We cringe, shrink, wish to disappear at the thought that these ‘facts’ about ourselves might be observed by another, and thus shame characteristically leads to concealment, to hiding, and to deception. Loss of face, disgrace, and dishonour are close relatives in the family of shame. Shame can also produce a feeling of ineptness, incapacity, and a feeling of not belonging. And so we defend strongly against shame by withdrawal, avoidance (which can take many different forms), attacking others, and attacking the self.

Deep shame is primarily an inner experience that comes from an internalised sense of being unacceptable, unlovable. We might even be enjoying some good fortune when seemingly out of nowhere comes the knowledge of our unworthiness, this previously unthought inner reality. We don’t deserve to be here – who do I think I am? Who did I think I was? There’s no one to hide from, nothing to hide from, nowhere to go, and certainly no going back. That person is mortified, dead:  what do people say: ‘I was so embarrassed/ ashamed I could have died.’ This is existential shame that implies fear of total abandonment and a fear of psychic extinction.

There’s a powerful description of spiritual shame in Thomas Merton’s autobiography The Seven Storey Mountain where he writes of a sudden realisation that he was living ‘as if God only existed to do me temporal favours’. From this arises deep unease and memories of his past; Merton calls this the ‘false humility of hell’ and ‘an unending, burning shame’ of what he calls ‘the inescapable stigma of our sins’ and ‘it is pride that feels the burning of that shame.’ 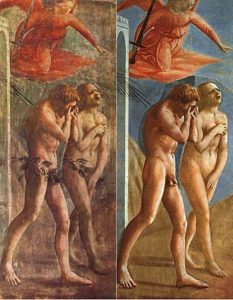 The Expulsion from the Garden of Eden by Masaccio – this is before (on the left) and after restoration.

It was the analytical psychologist Carl Jung who wrote that ‘Shame is a soul eating emotion’, and it certainly is something that lingers long after anger, or sadness or happiness have passed. In the next few posts I’m including some of the ideas that came from a talk that I gave about ‘Shame’.

I distinguished between an inner shame and outer shame, and used the biblical story of the expulsion of Adam and Eve from Paradise which is the most influential myth in our culture dealing with shame. In it we are told that, after eating from the Tree of Knowledge, Adam and Eve suddenly felt ashamed of their nakedness. Before this incident, they had been naked without feeling ashamed. But the fruit of knowledge gave them the capacity to distinguish between ‘I and Thou’, subject and object, and thus they awoke to the realization that they were two separate beings – her naked body was different from his, as was plain to see.  Feeling ashamed, and ashamed in front of God about what they had done, they stitched together garments of fig-leaves to cover their ‘private parts’.

In the famous painting of the expulsion by the Renaissance artist Masaccio you can see the particular gestures of Adam and those of Eve that depict the primeval couple’s shame according to traditional gender stereotypes. Adam, distraught, covers his eyes with his hands. Eve, agonized, clutches one hand over her breasts and the other over her pubic area. This shows the potential for clash and shame regarding ‘passive elements’ of the female as the subject of Adam’s masculine ‘active’ looking. In these stereotypes, the man, seen as a primarily rational being, experiences intellectual (or spiritual) shame and thus covers his face (or head) as the seat of reason, whereas the woman, seen as a primarily carnal being, experiences sexual shame and thus covers her erogenous zones.

Using analytic language the cherubim that guards and indeed blocks the way to the tree of life can be seen as a superegoic figure. In the picture the cherubim is painted floating above the couple and carrying a flaming sword looking judgementally down and reminding Adam and Eve of their shame. It can also be seen as the self-critical and self-conscious internalised figure of the parent or father God, which is projected out into the gaze of the other. The effect on Adam and Eve will be to inhibit, and withdraw, and curtail their ability to live fully without self-consciousness.

Interpreting this archetypal story, we may conclude that shame arises with the awareness of being seen by others. Shame motivates us to protect our intimacy, physical and emotional, under the cover of a symbolic fig leaf or loincloth, to keep for ourselves what is ‘no one else’s business.’ In this way, it reinforces interpersonal distinctness and a sense of one’s own individual identity. The fear is about vulnerability, and exposure of where we are defenceless. In this way it confirms that we are apparently different from each other with our own identity. But, at the same time, shame actually acts as a powerful inducement toward conformity.