In December 1965 Thomas Merton writes about going down to midnight mass from the hermitage where he was living.

‘I found it storming with rain and huge winds in the dark woods. The walk down was exciting. Coming back the rain had stopped. I came up through the field was glad to get into the silence of the hermitage which made more sense than ever. I made my Thanksgiving quietly said Lauds and had a snack and some wine (the last of what Brother Clement gave me a couple of months ago) and so went back to bed for a couple of hours. Got up again, said Prime and read… It is the kind of day I like, and like Christmas to be too: dark, cloudy, windy, cold with light rain blowing now and then. I have had wonderful Christmases (Christmas weeks) here with this kind of winter weather, unforgettable. Days not too bad for walking out on the wooded knobs, cold and lonelier than ever and full of apparent meaning. They talked me of my vocation.’

Merton goes on to describe the midnight mass feeling that the community was fully involved, although, for him, the celebration was still spoilt by what he saw as a sense of a certain falsity and wilfulness which some infected into it – ‘They always overdo a good thing.’ ‘Yet at the same time, I was moved by the simplicity and sincerity of Brother Cuthbert kneeling before the crib.’

He writes that he didn’t get the awful depression that he had had a couple of times at Christmas in recent years. And he thanks God for that wondering whether this comes from his thoughts about death that were opening out with the last days of Advent:

‘seeing death is built into my life and accepting it in and with life (not trying to push it out of life, keep it away from contaminating a life supposedly completely other than it. Death is flowering in my life as a part and fulfilment of it – its term, its final chord).’ 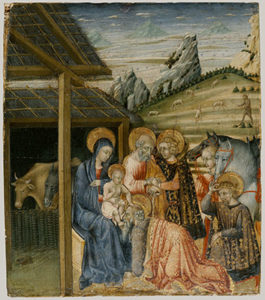